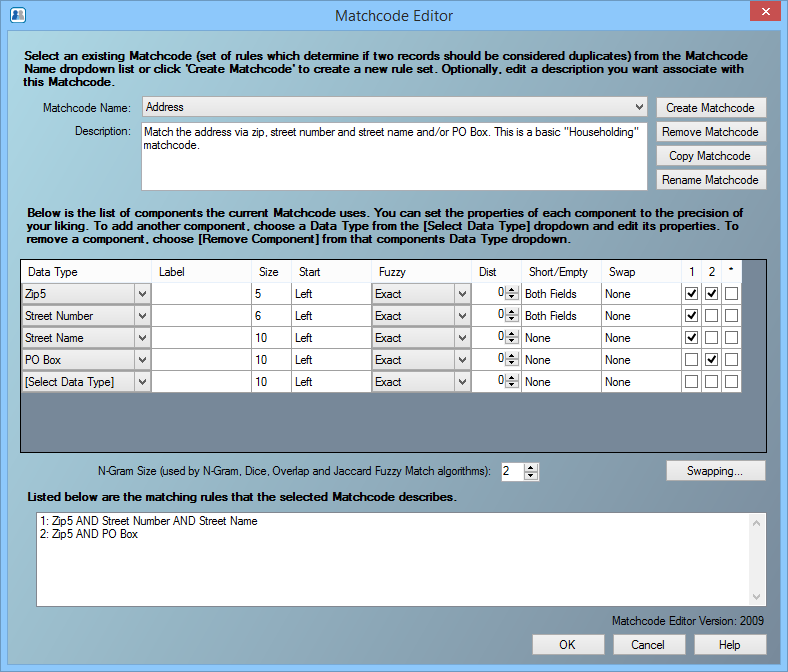 The following table lists all the available matchcode components in MatchUp Object:

Size
The maximum number of characters from this component to be used by this matchcode. If the data has fewer characters, it will be padded with spaces. Sizing is done after all other properties are applied

Label
(Optional) A description of the data found in this component. Not all component types use this field. Not all fields allow the label to be edited. This is most useful for clarifying the contents of General fields that don't fit any of the other component types.

Starts from the first character of the field. This is the most commonly used option.

Starts form a specific position within the field.

Starts from the beginning of a specific word. This should only be used if a particular field always has more than one word and first word (or more) can safely be ignored.

Trim
This property tells MatchUp Object to remove excess spaces from the beginning of a piece of data, the end or both. Usually, this property is always enabled.

These properties allow for matching of non-exact components. These options are mutually exclusive, so you can only select one at a time.

Phonetex
(pronounced "Fo-NEH-tex") An auditory matching algorithm. It works best in matching words that sound alike but are spelled differently. It is an improvement over the Soundex algorithm described below.

Soundex
Another, older, auditory matching algorithm. Although the Phonetex algorithm is measurable superior, the Soundex algorithm is presented for users who need to create a machcode that emulates one from another application.

Fast Near
A typographical matching algorithm. It works best in matching words that don't match because of a few typographical errors. Exactly how many errors is specified on a scale from 1 to 4 (1 being the tightest). The Fast Near algorithm is a faster approximation of the Accurate Near algorithm described below. The tradeoff for speed is accuracy; sometimes Fast Near will find false matches or miss true matches.

Frequency Near
Similar to Frequency matching except that a slider lets you specify how many characters may be different between components.

Vowels Only
Only vowels will be compared. Consonants will be removed.

Consonants Only
Only consonants will be compared. Vowels will be removed.

Alphas Only
Only alphabetic characters will be compared.

Numerics Only
Only numeric characters will be compared. Decimals and signs are considered numeric.

Please research the definitions of the following advanced algorithms before implementing in a matchcode.

Jaro-Winkler
Just like Jaro, but gives added weight for matching characters at the start of the string (up to 4 characters).

n-Gram
Counts the number of common sub-strings (grams) between the two strings. Substring size ‘N’, is currently defaulted as 2 in MatchUp.

Needleman-Wunch
Similar to Accurate Near, except that inserts/deletes aren’t weighted as heavily and as compensation for keyboarding mis-hits, not all character substitutions are weighted equally.

Smith-Waterman-Gotoh
Builds on Needleman-Wunch, but gives a non-linear penalty for deletions. This effectively adds the ‘understanding’ that the keyboarder may have tried to abbreviate one of the words.

MD Keyboard
An algorithm developed by Melissa Data which counts keyboarding mis-hits with a weighted penalty based on the distance of the mis-hit and assigns a percentage of similarity between the compared strings.

These settings control matching between incomplete or empty fields. They are not mutually exclusive, meaning that any combination of these settings may be selected.

Match if both fields are blank
Match this component if both records contain no data. This is a very important concept in creating matchcodes. See Blank Field Matching later in this chapter for more information.

Match if one field is blank
Will match a full word to no data (for example, “John” and “”).

Match initial to full field
Will match a full word to an initial (for example, “J” and “John”).

Uses these check boxes to select which of the sixteen possible combinations will use this component. This matrix will grow as you add more components and combinations.

It is easier to visualize the effects of these boxes if you look at the list of matchcode components as well:

It is important to note that each VERTICAL column of check marks designates one acceptable matchcode. For example, the illustration above shows a combination that is made up of 4 matchcodes:

Swap matching is the ability to compare one component to another component.

For example, if you were to swap match a First Name component and a Last Name component, you could match “John Smith” to “Smith John.” Swap matching is always defined for a pair of components.

MatchUp allows you to specify up to 8 swap pairs (named “Pair A” through “Pair H”). It is strongly recommended that the other properties of both member components are identical.

To configure a swap pair: